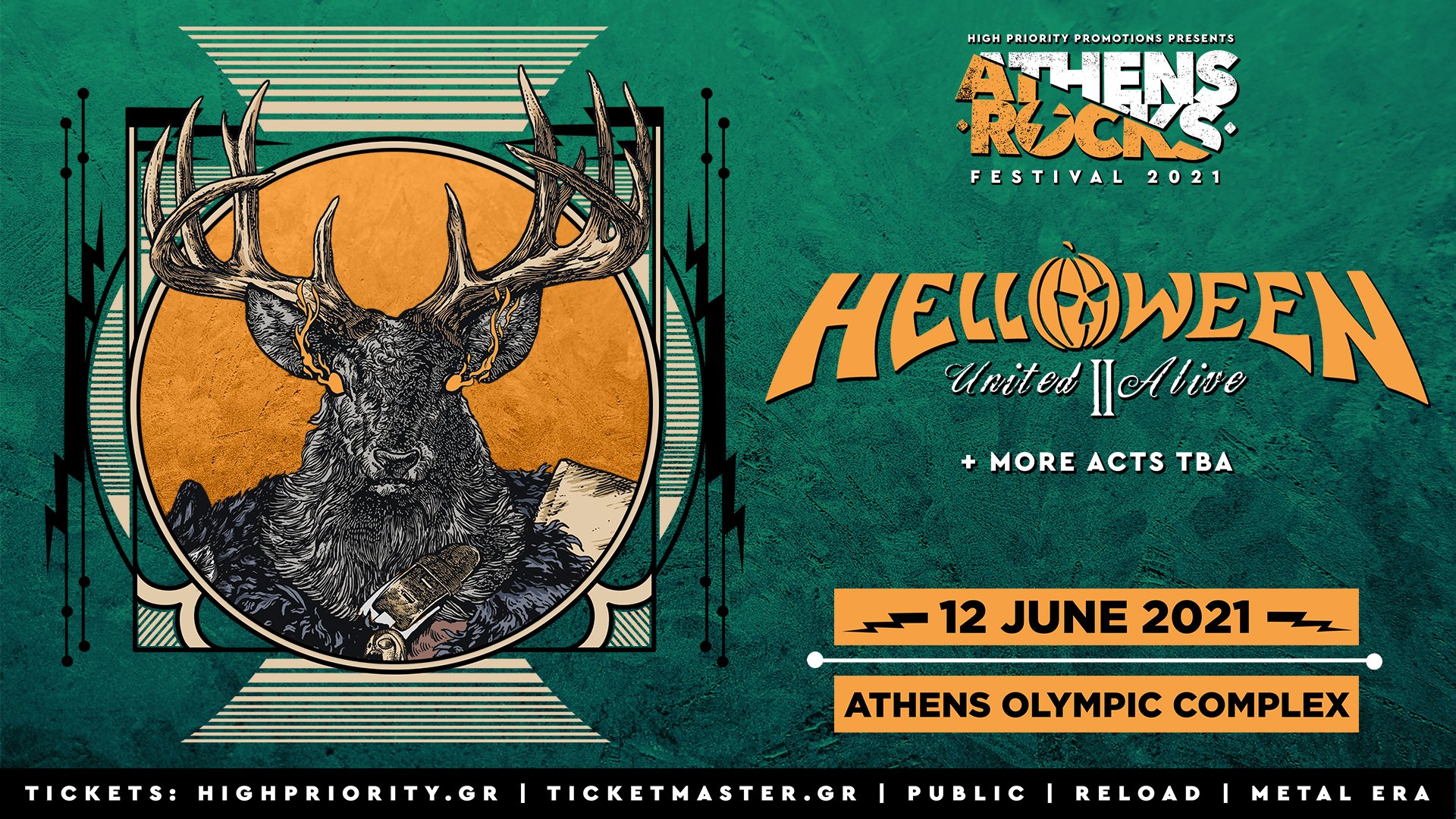 Helloween would like everyone to attend their shows, without having second thoughts, so they’re rescheduling their world tour for 2021, setting the scene for an ideal “Future World”!

As the band itself says: “A Helloween concert should be a gathering of all fans having fun, enjoying themselves by celebrating the music we all love”.

So, the incredible line up we are waiting for, arrives on Saturday, June 12th, 2021 at OAKA, where we will all shout together We Want Out, in one of the biggest metal events we have ever seen on Greek soil, with the raging show of Helloween Pumpkins United lasting 2.5 hours!

There will be news for the rest of the festival’s line up very soon! Just a day prior to the appearance of The National, IDLES & Balthazar at OAKA, the same venue will become the meeting point for every metalhead who is anticipating this great show to take place!

Those who wish to make some serious headbanging in front of the metal stage of AthensRocks, keep your tickets until Saturday, June 12th, 2021! The time will pass and we will be back, where we want to be! For any other information about your tickets, you can contact info@highpriority.gr until Wednesday, June 10th 2020 the latest.

Helloween
Where there's power metal, one finds Helloween, and where there’s Helloween, one finds power metal, since we are talking about the German ancestors of the European genre. Sometime in 1984, in Hamburg, the story of hard sound was about to change forever. Kai Hansen (guitar, voice), Michael Weikath (guitars), Markus Grosskopf (bass) and Ingo Schwichtenberg (drums) became Metal Invaders introducing to the music fans across the globe their favourite music. "Walls of Jericho", Helloween's debut album, stands to this day as a valuable totem, counting countless fans and listeners.

Somewhere out there, the band meets Michael Kiske, known now for his impeccable voice and unparalleled performance. Two "Keeper of the Seven Keys" and countless fans are driven insane, as "I Want Out", "Future World" & "Eagle Fly Free" become the hymns of a generation. Hansen departs from the group, but Helloween's creativity doesn't stop and they are welcomed by audiences and critics as the most iconic band of power metal!

"Pink Bubbles Go Ape" & "Chameleon" follow and Michael Kiske leaves the band, while Schwichtenberg also leaves, just two years before he tragically dies. Rearrangements in the Pumpkins, with Andy Deris appearing as a deus ex machina, managing to fit in the shoes of the band's departed frontman. Twenty two years later and Deris is the longest-running Helloween singer, singing overwhelmingly in each of the ten albums! Sometimes more experimental ("Better than Raw"), sometimes darker ("Dark Ride"), sometimes honoring their power metal roots ("7 Sinners" & "Straight out of Hell"), the band never took a rest and kept on releasing much-loved records.

But the time came somewhere in 2016 for what their ubiquitous fans were praying for! Michael Kiske & Kai Hansen are back in the band and the Pumpkins United tour with all of the band’s singers on stage, becomes the talk of the town for all the metal heads of the planet!

*Hard-copy collectible tickets of AthensRocks will soon be available at pre-sale spots!